Ranveer Allahbadia is a renowned Indian YouTuber with a large fan base. His YouTube channel, BeerBiceps, focuses on self-improvement, entrepreneurship, and other topics. Ranveer Allahbadia was born in Mumbai, Maharashtra on June 1, 1993. His parents are also doctors. Gautam Nand Allahbadia, his father, is a doctor and the medical director of Millennium Medical Center MMC IVF Fertility Center in Dubai.

Ranveer attended Dhirubhai Ambani International School in Mumbai. His school motto, “Dare to Dream, Learn to Excel,” which was printed on his school diaries and calendars, motivated him greatly.

Ranveer obtained a digital camera from his father when he was 12 years old, in 2005. He learned photography and filmmaking on his thanks to this camera. Ranveer later recorded a video of his neighborhood’s stray dogs and children. After filming this movie, he downloaded video editing software onto his PC, learned video editing, and edited it. Ranveer became interested in filmmaking after filming his first video. At the time, he was inspired by Yash Chopra and aspired to become a Bollywood film director.

However, his parents encouraged Ranveer to consider being a filmmaker only once he graduated. And, when he was in the tenth grade, his parents told him that he couldn’t pursue Bollywood since he came from a family of physicians, not Bollywood performers. As a result, Ranveer abandoned his ambition to become a Bollywood film director.

✅ The dark phase of Ranveer Allahbadia

Due to various personal issues, he began overeating junk food in high school. As a result, Ranveer gained weight and, at the age of 16, had a gallbladder stone and other health problems.

The silver lining was that his health problems brought him to exercise. Ranveer began working out in his second year of engineering. He began to drink alcohol during this period of his life, owing to the society of unpleasant individuals with whom he surrounded himself.

Ranveer’s life was filled with extreme negativism in the form of poor company, bad relationships, a lousy school system, college failures, and so on.

All of these conditions caused him to ignore his academics, and he frequently rushed before exams.

Ranveer began drinking alcohol three times a week as a result of all the unpleasant events in his life.

He became an alcoholic at this stage in his life.

By seeing his son’s behaviors, his parents were too anxious for him. Unfortunately, Ranveer experienced a break-up during this period of his life. And the new person with whom he began a relationship deceived him.

Ranveer considered suicide as a result of all his failures.

Fortunately, his parents recognized his condition and the circumstances that led to his failure, and they provided him with adequate assistance.

His mother emphasized to him that there is much more to life than failing tests and that education is only a small portion of it. So, the next day, his mother granted Ranveer permission to do whatever made him happy.

So he got a tattoo on his arm to remind him of the lowest point in his life anytime he looked at his tattoo.

By glancing at the tattoo, Ranveer confirms to himself that he has been through the darkest period of his life and that nothing could be worse.

This tattoo reminded him that he had triumphed over adversity in his life and that he could face any obstacles that came his way.

Ranveer cut back on his alcohol consumption after realizing that it was causing him to fail.

These changes contributed brightness to Ranveer Allahbadia’s life, and he began to like engineering and began studying diligently, even though many of his peers dropped out of college.

Finally, he graduated with honors from Dwarkadas J. Sanghvi College of Engineering in 2015.

Through his YouTube channel, Ranveer reignited his boyhood goal of becoming a filmmaker. After a while, he discovered YouTube monetization and abandoned his fitness app concept to focus completely on his YouTube channel.

His regular day consisted of filming films from the morning until the afternoon, followed by editing those movies till the evening.

Then Ranveer would go to the gym, following which he would coach others till late at night; he would also distribute flyers about his YouTube channel.

He used to get home around midnight after doing all of these activities.

✅ Selling his most precious thing Ranveer sold his PlayStation 2 and all of his video games to pay for the equipment needed for YouTubing.

He had a strong affinity for PlayStation because he had used it for over ten years.

However, Ranveer sold his most prized possessions to realize his ambition and avoid relying on his parents’ finances.

Initially, he posted films on fitness, but he eventually began posting videos about life tips as well.

✅ A million views of Ranveer

Monk Entertainment, often known as Monk-E, is a private management consulting firm based in Mumbai, Maharashtra, launched in 2017 by Ranveer and Viraj Sheth. Monk-E is a media company focused on influencer marketing, social media management, digital advertising, and video creation.

Ranveer Singh is a well-known YouTuber and entrepreneur. BeerBiceps, his YouTube channel, has more than 4 million subscribers. 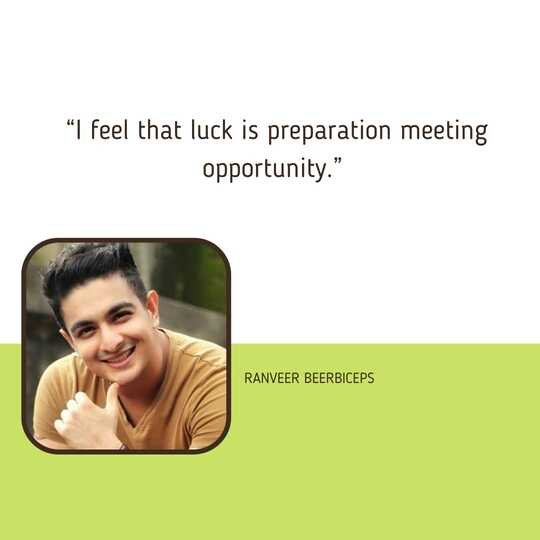